April 9, 1989: On this day in sports history…
Scott Hoch Chokes at Augusta

The video below speaks for itself. In a sudden death playoff with Nick Faldo, Scott Hoch stood over a 2-foot (maybe 18 inches) putt on the 10th hole at the Augusta. A gimmie, a bunny, a tap-in; all that separated Hoch and golf immortality– a Masters’ Championship, a Green Jacket, a lifetime exemption. 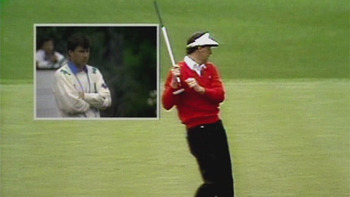 Hoch choked. The putt never had a chance.
The twosome moved on to the 11th, where Faldo banged home a 25-foot birdie putt and claimed the first of what would be three Green Jackets. Hoch, after experiencing one of the biggest choke jobs in golf history, would continue a fine career by anyone’s standards, but would never again sniff Butler Cabin or a Masters’ Championship.